Burleigh Murray State Park is a small and relatively recent addition to California's State Park system. Originally the site of a working ranch on the outskirts of Half Moon Bay, it is now known as one of the best locations for butterflies in the San Francisco Bay area. Featured species include Margined [Mustard] White, Two-banded Checkered-Skipper, and both Satyr and Oreas Commas. 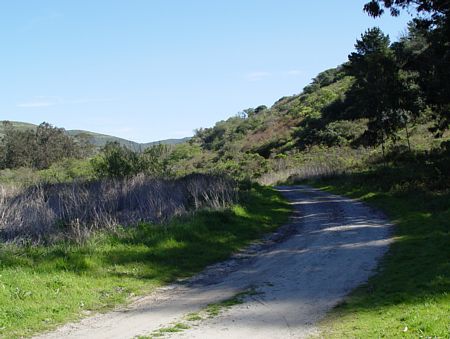 Burleigh Murray is at its best from March through June, but is worth visiting year-round on any suitably warm and calm day. But be forewarned: this is less than three miles from the Pacific Ocean, and the weather here is notoriously unpredictable. Any day, even mid-summer, can greet a butterflier with cold, foggy, and windy weather. When that happens, head back east over the coastal range towards San Francisco Bay, where the weather might be entirely different.

Interesting birds of the park include MacGillivray's Warbler, Red-breasted Sapsucker (uncommon), Allen's Hummingbird, and Wrentit. Bobcat is regularly seen. (If you've identified any interesting dragonflies in the park, please .)

The park has only one trail, which follows a willow-lined creek for about two miles up into the hills along a gradual incline. Halfway up the hill, you'll find the remaining buildings of the ranch. Be sure to explore the area around the barn before continuing higher up. The trail becomes narrower (and occasionally overgrown) as it continues to climb. This upper section is usually the most active, with a constant stream of crescents and buckeyes, as well as all of the specialities of the park. Once you've reached the large water storage tank, you're more-or-less at the end of the trail.

Species are followed by their abundance and a range of months. The months are conservatively listed, restricted to confirmed records from this park. If you have any additional records, please .